Home Board Games Catan
← Back to Catan 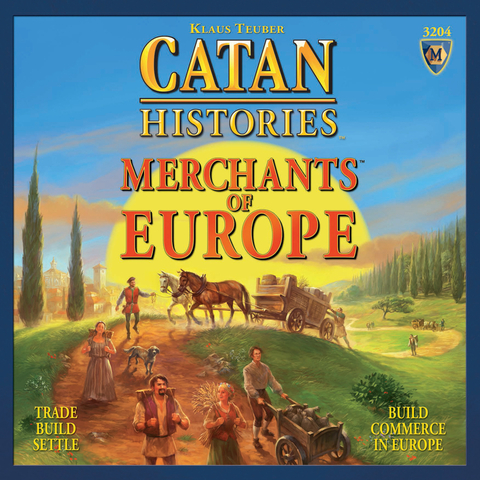 In the late Middle Ages, trade flourished in Europe. Economic groups like the Hanseatic League, the Welser and Fugger families, and merchants from Northern Italy established trading posts and factories in all of the important cities throughout Europe. These businesses provided the population with goods of all kinds, such as fur from the north, cloth from Flanders, wine from the south, and spices from India. The most important commodity of all was salt. In the Middle Ages salt was highly prized it was used to preserve food.

In Catan Histories: Merchants of Europe, you are a powerful merchant! Start your trading posts in three cities. Recruit new merchants and send them to distant cities to establish trading posts and expand your interests. The more trading posts you have, the more commodities are at your disposal which you can sell profitably in foreign
cities. To ensure that your commodities arrive safely at their destination, you must open up trade routes and equip caravans. You win the game if you are the first to deliver all of your commodities to foreign cities.

Catan Histories: Merchants of Europe is a twist on the 2010 release Settlers of America: Trails to Rails from designer Klaus Teuber and publisher Mayfair Games. Game play is similar in both games: Players start with three locations on the game board, collect resources depending on a die roll, spend resources to move and build, and branch out to new locations with a long-term goal of delivering goods to opponents' cities. The first player to deliver all of his goods wins the game.

Instead of being played on a fixed game board showing a Catan-ified map of the United States, Die Siedler von Catan: Aufbruch der Händler is set on a Catan-ified map of Europe – which isn't a surprise given that Kosmos is a European publisher. Instead of moving from east to west to mimic the settling of the U.S. by Europeans, players start in the middle of Europe, namely Germany.